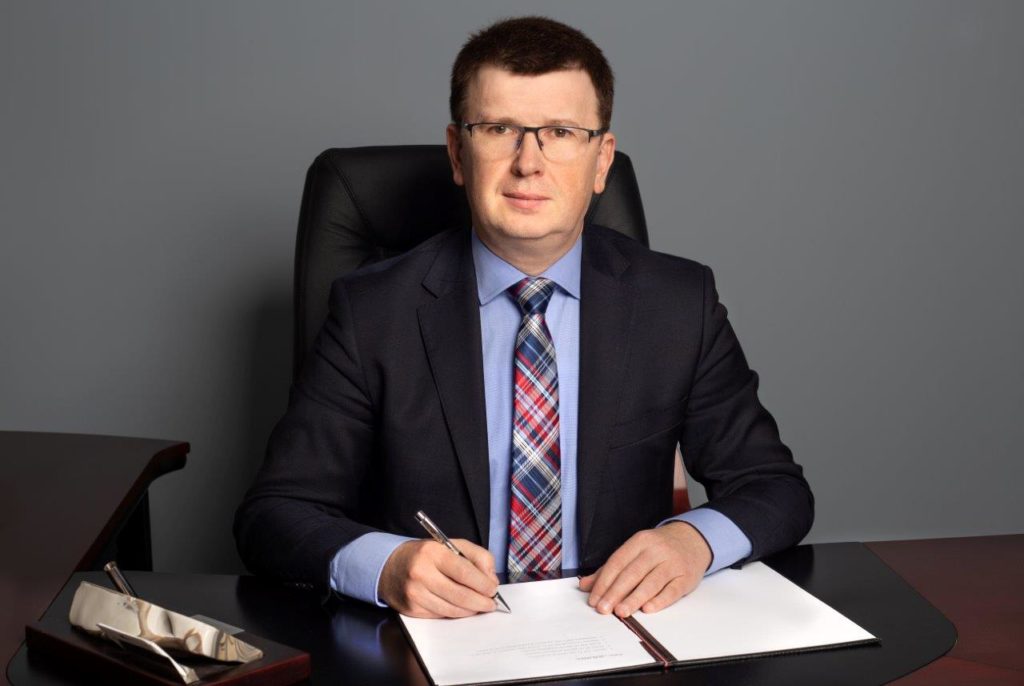 I was born in Ostrowiec Swietokrzyski, Poland. I have connected my professional career with this town, where I started a family with my wife Monika and raised two children – Iza and Kamil, who are always happy to return here.

I am a graduate of the Automotive Technical School in Ostrowiec Swietokrzyski. I graduated from the Faculty of Electrical Power Engineering at the University of Kando Kalman in Budapest. Since then, I have been fascinated by Hungarian culture and Hungarians’ approach to life, and the cuisine of that region is one of my favorites. In 2011, I obtained an MBA from the Lublin University of Technology and the University of Illinois in Chicago.

I am a man of technology. I started my professional career as an investment inspector at the Town Hall in Ostrowiec Swietokrzyski in 1995, and a few years later I was promoted to the position of the head of the department for the implementation of the city strategy. In 2006, in the local government elections, I was elected to the County Council. However, I submitted my mandate as in December 2006 I was appointed the vice-president of the city. Taking part in the implementation of the most important investment projects in Ostrowiec Swietokrzyski from the very beginning, I learned “inside out” the problems faced by investors and entrepreneurs.

I try to help others, so apart from my professional work I am involved in social activities. In the years 2002-2006 I was the chairman of the Local Government Council of the “Ludwikov” Housing Estate in Ostrowiec Swietokrzyski. I was the vice-president and co-founder of the Association of Local Government Housing and Municipal Councils. From its inception to 2014, I was a board member of the “Your Ostrovian Local Government” Association, which won the local elections in the Ostrowiec County in 2006 and 2010.

In the elections to the Sejm of the Republic of Poland on October 9, 2011, I obtained a seat in the Sejm of the 7th term. As an MP, I strove for a solution to the problem of reverse VAT, which was particularly hard on the Polish steel industry. In my private life, the most important thing for me is my family, although unfortunately I have much less time for them than I used to. I try to make up for it by spending every vacation with my wife and children, traveling together around Poland and Europe. Gardening is also my passion, which relaxes me. My greatest weakness is my wife’s sweets and cakes. Self-government has always been my great passion. The matters of my town – Ostrowiec Swietokrzyski and its inhabitants – were my priority. Many issues have been resolved through parliamentary work. In 2014, I ran in the local government elections. In November, I was elected the mayor of Ostrowiec Świętokrzyski, introducing as many as 15 councilors to the City Council. On December 4, 2014, I took a solemn oath, and my parliamentary term expired. Since then, I have been actively participating in the work of the Association of Polish Cities.

For four years, together with a team of specialists, we have created a unique brand of Ostrowiec Świętokrzyski based on the slogan MiastoOdNowa (The Town From the Start). The decrease in unemployment, the growing number of new business entities, and the growing incomes of the commune are mainly the result of the new approach to the functioning of the city as a living organism, in which its citizens are the most important element. The motto that the city must be for people is the main driving force behind my actions. Equally important is the aesthetics of the common space – a well-kept, clean city, parks, streets and housing estates, which are more and more functional for their inhabitants.Ostrowiec Świętokrzyski has become an attractive location for new and development of existing investments. The freezing of property tax rates and a significant reduction in the tax on means of transport did not leave the city budget empty, but significantly facilitated the development of local businesses. The city has prepared a good offer for new investors, which it is constantly expanding and improving. So far, 55 ha of investment areas have been prepared, where the first investments are already underway. .

The new road network, the offer of apartments in the development system and the offer for single-family housing, development of education, support for young families and seniors, but also the implementation of strategic, long-awaited investments – the Ostrovian Brewery of Culture and the reactivation of outdoor swimming pools in Rawszczyzna are our showpieces.Thanks to this, Ostrowiec Świętokrzyski is changing, which is noticed by independent bodies, but most of all inhabitants of Ostrowiec, who expressed their opinion in the last elections by giving me over 70% of support. I appreciate the trust that the residents placed in my committee, which allowed us to start a common policy of the town and the county.

In the elections to the Sejm of the Republic of Poland on October 9, 2011, I obtained a seat in the Sejm of the 7th term. I started on the lists of the Polish People’s Party Electoral Committee, obtaining 4,814 votes. In the same year, I opened a Deputies’ Office in Ostrowiec Świętokrzyski. On November 8, 2011, I took the oath. During the four-year term of office, I took the floor 123 times at sessions of the Sejm. From the very beginning of my term of office, I was a member of the Foreign Affairs Committee and the European Union Committee, as well as the Parliamentary Group for Energy, where I was the vice-chairman. I submitted 124 interpellations, 9 questions, and made two statements. I took part in almost 95% of the votes.

All these materials are available on the website www.sejm.gov.pl As an MP, I strove for a solution to the problem of reverse VAT, which was particularly hard on the Polish steel industry, so closely related to Ostrowiec Świętokrzyski. From the beginning of my work in the Sejm, I also strove for the creation of a category A and B driver examination center in Ostrowiec Świętokrzyski.